New designed and with up to four heads!

Fritsch GmbH Kastl. The previous dispenseALL series is being replaced and renewed by the further-developed dispenseALL420. The dosing portal can be equipped with up to four of the same or different dosing valves, facilitating the simultaneous use of different media.  Jet and needle valves can now be combined with the modern and flexible system.

All heads have a motor-driven height adjustment, which can easily dose at different levels even without the application of permanent spacers.  A newly developed needle compensation and a distance sensor are the basis for accurate and reproducible dosing results.

The intuitive software of the dispenseALL420 is compatible with the placeALL® series and thus forms the prerequisite for easy data exchange between the two product series. Thanks to the integration of a conveyor, the dispenseALL420 can also be adapted directly to existing machines of the placeALL® series or machines of other manufacturers. (SMEMA-compatible) 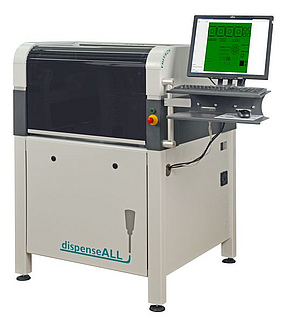 This website uses cookies. Those have two functions: On the one hand they are providing basic functionality for this website. On the other hand they allow us to improve our content for you by saving and analyzing anonymized user data. You can redraw your consent to using these cookies at any time. Find more information regarding cookies on our Data Protection Declaration and regarding us on the Legal notice.